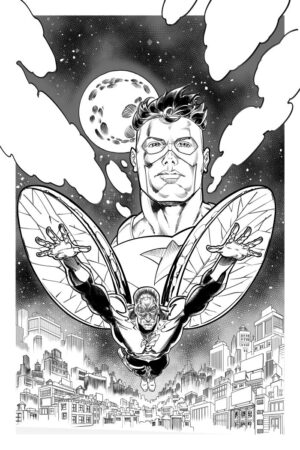 The Return of Archie Superheroes?

Although this won’t primarily be a news website, as there are people that already do that better than I can. There will be the occasional piece of news that I feel should be shared.

As we covered in Episode 3 of the podcast, and I wrote about in the Recap and ‘Spider and the Fly‘, Archie Comics dropped their superhero line-up in the 80s. Since then, many of their characters have had only short publications, including in Impact Comics, Red Circle and Dark Circle.

Courtesy of G-Man Comics and writer Rik Offenberger, it seems we may see some of these heroes rise again.
Meet Simon N. Kirby, The Agent. An obvious nod to Joe Simon and Jack Kirby, they are taking reference and paying homage to some of that eras greatest characters. One of the villains, Murder Hornet, may look particularly familiar to readers.

In this universe, congress passes the Superhero Registration Program in the early 60s. This requires all superheroes to register with the F.B.I., revealing their identity and becoming deputies of the agency. Although punishable by arrest and imprisonment, the program is unfunded and unenforced.
In 2018, under President Trump, the program finally receives funding and they place Simon N. Kirby in charge. Not only will he act as the leader of all those registered, but he will also actively enforce the rules of registration.

Taking influence from some of the greats of the golden era of comics, it promises to be a great series. Following from a hugely successful Kickstarter campaign, issues 1 and 2 are being shipped October 2020.

Take a look at the full announcement, credits and an interview with Offenberger Here
And check out the Kickstarter Here