Mike began his career by starting his own comic book company, NOBLE COMICS, whose first publication was a black and white anthology magazine called THE LANDS OF PRESTER JOHN an anthology of super/horror/sci-fi stories.
Soon after he went to work for a new company called POWER COMICS for which Mike was the art director and writer/artist of COBALT BLUE. From there Mike restarted NOBLE COMICS and began the superhero series that put him in the spotlight, The JUSTICE MACHINE.
After 5 issues he moved over to working for MARVEL and DC where he worked on such titles as BATMAN, THE NEW MUTANTS, HULK, AVENGERS. He also illustrated for smaller companies such as 1FIRST COMICS and NOW.

For G-Man Comics he will be doing the cover of Sgt. Flag #1 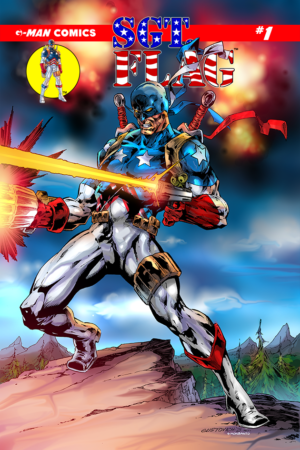