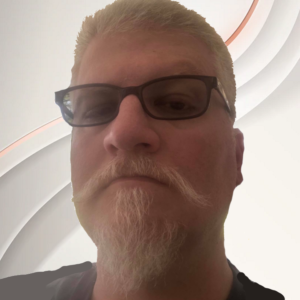 Eric is a full-time professional graphic artist for AccuWeather, Inc. in State College, Pennsylvania (home of Penn State University). A married father of two sons, Eric is best known for his character Steel Wolf. Here at G-Man Comics, he has created a parallel universe version of Steel Wolf, a character named American Eagle III. Eric also is known as “the profile guy,” having written and compiled well over 200 individual character handbook entries. He’s also written several short Steel Wolf stories, as well as a comic featuring the cosmic menace known as Stellarex. Additionally, he’s credited as the co-writer and letterer of several other story projects, some of which appear on the deviantART website, and others that are in progress to be released at a future date. His completed projects are currently available on IndyPlanet.com. Look for his character Steel Wolf on Facebook, as well as at Ursa Magnus on Deviant Art.

Eric has lettered most of the G-Man Comics and his writing is seen in G-Man Comics 3in1, G-Men United, and Taranis, The Thunderlord