Grace St. Croix is a member of one of New Acadia’s oldest and wealthiest families. The St. Croixes had been merchants and sea captains in Acadia (now Nova Scotia) before the English turned them out, and Jacques St. Croix immediately established himself as one of the leading merchants in Waterside. Two hundred and fifty years later, young Grace became disenchanted with the High Society circles her family traveled in, and using her trust fund, bought a small brownstone in the Mission Hill district. There she was drawn to the sheltered garden courtyard her building shared with the others on her block. It contained a small spring-fed fountain sheltered by a tall hawthorn tree.

For the next couple of years, Grace’s life consisted of charity and volunteer work and meditating in the garden, as she tried to find Truth and meaning apart from the St. Croix wealth and prestige. As her thoughts turned inward, something activated her latent metahuman powers, which manifested in two ways. Physically, she began to levitate, hovering cross-legged in mid-air. Psychically, she developed the ability at first to tell whether people were telling the truth and later to compel them to. Over time, both her telekinesis and her telepathy broadened. She learned to levitate and manipulate things other than herself, and to see the “truth” or meaning that people imbued things with. She first noticed the latter ability when she deciphered the meaning of an inscription almost entirely weathered off of the garden’s fountain. Later, she realized that she could understand what people were saying or even had written (by hand) in languages that she did not speak.

One day, she bumped into a tall stranger—Richard Hughes—on the street where she lived. She knew immediately that he was on some sort of quest. “What are you looking for?” she asked him. He was so startled that he answered without thinking or meaning to, “Truth, the Grail and the font of St. Bonaventure.”

“Truth,” she replied, “is all around you. I cannot help you with the Grail, and I don’t know about the saint, but there is a fountain carved by Gilbert Bonaventure in my garden, well our garden—I share it with my neighbors.”

“Really? Show me!” he said, bubbling over with enthusiasm. She looked him over, locking gazes with him, then nodded and led him through her home to the garden. When he asked how she knew who’d carved the font, she ran her fingers over the remaining bumps of the inscription and read it to him in Latin, then translated it to English. At first he was confused, but she took his hand and ran it over the inscription as she read it, and as she did so, he could see the letters just as she did. When he asked how she had done that, she replied, “I guess I’m a meta, like you, though not Myrmidon-class. I see the truth of things.” He was shocked that she could tell that he had gone through the super-soldier protocols, but realized that she was telling the truth. 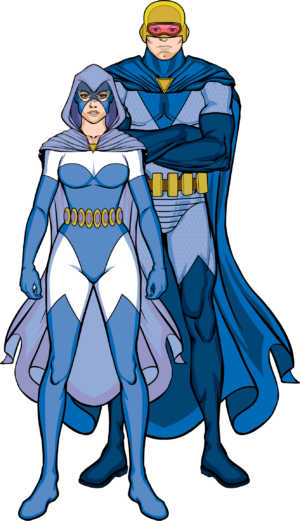 And so, True Blue met Richard, the True Knight. Having served 20 years, he had retired from the super-soldier program and had been allowed to register as a civilian superhero and keep the Mymidon amplification and control helmet. For now, though, he was on a quest, based on a prophecy and a scroll handed down to him as a family treasure. It was in a secret language, known only to the Knights Templar and now lost, but the meaning had been passed down orally from father to son. When he showed it to her, Grace read it and explained that it was not “the” Holy Grail, but another chalice that he was to find, and to use it to drink from Bonaventure’s well, beneath the thorn tree grown from a sprig off Joseph of Arimathea’s staff, in the New World—probably the one in her garden.

Seeing his dedication to his quest and his fundamental heroic nature inspired Grace to use her gifts—her metahuman powers—as a superhero, and he, seeing her dedication to truth and justice, joined her as her sidekick. They became True Blue and Richard, the True Knight. Someday, they are sure, they will find his grail. For now, though, they serve another way.

The exact nature and full extent of True Blue’s powers aren’t known. It is clear that she has at least the genes for both telekinesis (Ψ3Tk) and telepathy (Ψ3Tp). Her TK manifests as flight and a form of telekinetic shield that can deflect small arms fire and filter light-based and electromagnetic weaponry. Her TP gives her the ability to detect if someone is lying, induce them to tell the truth, and to lose track of the fact that she can do these things. She can see the hidden meaning in writing and other artifacts created to convey meaning through some form of mental connection with the creators.

It has been suggested that she has somehow enhanced the powers of her sidekick, Richard, the True Knight, but this has not yet been confirmed.

True Blue wears a costume with a cape, cowl, and face-blindness mask to hide her identity. (If asked her identity, she will either be silent or speak evasively. True Blue is not going to lie!) It is light-weight spider silk armor, a product of Mistress Tchen of the Household, and is puncture-proof and therefore somewhat protective. The cape’s contouring also assists streamlining when she flies.

Since becoming an active superhero, she has taken martial arts lessons from Richard, helping her defend herself on the street. These skills are enhanced by her telepathic ability, which can allow her to anticipate, to an extent, her opponents’ moves. So she is not a physically powerful assailant, but she is very hard to hit.

Richard Hughes, like his father and grandfather before him, is a Myrmidon-class super-soldier. Therefore, he has enhanced strength, endurance, and speed, all fundamentally telekinetic in nature, as well as accelerated healing and partial invulnerability. He has the standard equipment of a Myrmidon: the amplification helmet and the kevlar-style armored costume which he has augmented with lightweight chainmail. He knows how to use a gun but does not routinely carry one, to discourage violent escalation. He does, however, use a collapsible quarterstaff, and knows how to use a bastard sword.

Their greatest tool, though, is their teamwork. True Blue depends on the True Knight for physical protection, and he depends on her for intelligence and guidance (what weapons to bring, what approach to take, who the real enemies are), and psychic protection.