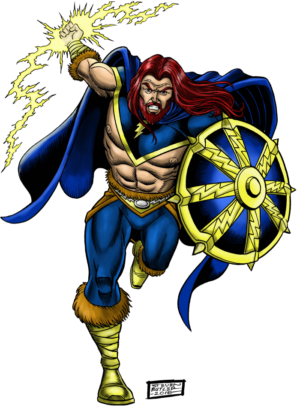 The early life of Taranis the Thunderlord, one of the children of the god Iarbonel and the goddess Danu, remains largely unknown. What is known is that when the Tuatha Dé Danann (or “The Children of Danu”, more often referred to as the Celtic gods) settled on the mystical Isle of Tir na nÓg, Taranis was instrumental in the eventual defeat of the Isle’s prior inhabitants the Fomorians and the Fir Bolg. He was present when the Tuatha Dé and the Fir Bolg signed the armistice that split Tir na nÓg between them.

Taranis was widely worshiped throughout the old world and held in high regard among other pantheons, earning him many friends and many enemies. He struck up a centuries-long friendship with the Teutonic Thunder God named Donar (with whom he shared many adventures), and the Norse god Tyr, despite the animosity that existed between their two pantheons (see Donar, Tyr) who were still engaged in a blood feud as a result of long-past grievances.

As the Roman Empire’s influence expanded, their campaign to wipe out, assimilate, or replace the religions of those whom they conquered began to affect many of the world’s pantheons. So successful was the assimilation and eradication of the Celtic gods’ followers that Sucellos, now known as The Dagda and King of the Celts, eventually severed all ties to the mortal realm in an attempt to save the lives of the Tuatha Dé Dannann who had not already vanished, merged with the human populace, been assimilated into competing religions, or imprisoned.

During the period following the collapse of the Roman Empire in 476 A.D., the period commonly referred to as the Dark Age, The Tuatha Dé Danann experienced a resurgence, and The Dagda once more opened the pathways to mankind. But there were still those who sought the fall of the mighty Celtic gods. The Drow, another ancient race displaced when the Tuatha Dé took over Avalon, manipulated the rising Christian religion into a campaign to once more stamp out or assimilate all traces of the Celts. Eventually, after warring in secret for several more centuries, Taranis confronted a group of Drow disguised as Christian Monks in the year 1217 A.D. who, though the cost was high, used their powerful Faerie magicks to imprison him, body and soul, in a small statue bearing his likeness. For the next 800 years, Taranis remained imprisoned in a dreamless sleep within the statue, while the dark magick worked on his mind, slowly eroding his memories and sense of self.

As the centuries moved on, and the influence of the gods on mortal man grew less and less, many of the other great pantheons of the world retreated into obscurity or isolation. And all forswore direct intervention in mankind’s fate as more and more humans placed their faith in technology over the old gods.

The statue containing Taranis’ essence passed through many hands through the centuries until finally ending up in the National Museum of Ireland in modern times. During a cultural exchange with the New York Museum of Natural History, the statue was brought to the United States and placed in a display with other ancient effigies of pagan gods. It was here that archaeologist Donal Stoner accompanied his class during a field trip to the museum. It was also during this time that the museum was attacked by the criminal known as Prime-8. The bestial villain wrecked the exhibit, apparently in search of something, and threatened Stoner’s students doing so. Stoner was attempting to shield his charges when the display containing the statue of Taranis was smashed, causing the statue to shatter when it impacted the floor beside him. And in a bright flash of mystical light, Stoner was gone and Taranis stood in his place.

But with Taranis, the Thunderlord once more walking the mortal world, what other forces have awoken? Ancient forces long sleeping, jostled awake by his thunder? New threats seeking to prove their own might? Only time will tell.

As a member of the Tuatha Dé Danann (the race commonly known as the Celtic gods), Taranis possesses several physical abilities native to his people, though as the God of Thunder, his abilities far outstrip those of a normal member of his race.

Taranis possesses Class 100 strength, enabling him to lift (press) far in excess of 100 tons. His strength is significantly greater than that of a normal male member of his race (a normal Celtic god can lift approximately 30 tons), though both The Dagda and the god Ogmios possess strength that is a match for his own.

Celtic flesh and bone are several times denser than that of a normal human, contributing to Taranis’ superhuman strength and weight. His muscle density is fortified to the point where his skin can resist without rupture ballistic impacts equivalent to armor-piercing .50 caliber machine gun shells, or around 800 pounds of TNT. He is also able to endure extremes of temperature ranging from -200° F (-128° C) to well over 2,000° F (1,093° C) and pressure from .02 to 12.5 atmospheres. His immune system is highly resistant to most toxins and diseases found in the mortal realms, and while not a true immortal like the Olympians, Taranis’ lifespan will measure in the hundreds of thousands of years. Like the Aesir of Norse mythology, the Tuatha Dé Dannan consume Golden Apples (though not the same apples that grow on the goddess Idunn’s tree) to retain their youth and strength extend their lifespans. Additionally, Taranis’ body heals at an accelerated rate, allowing him to recover from injuries or intense exertion far faster than normal. His natural speed and reflexes are enhanced, and allow him to react and move at approximately three times the speed of a normal human.

As the God of Thunder, Taranis possesses the ability to manipulate weather patterns to create any meteorological effect he so desires. He has been observed to summon and control storms with wind intensities exceeding Category Five hurricanes (sustained winds greater than 155 mph), which can cover an area ranging from several thousand miles to a much tighter area of only a few feet. At the most concentrated, the wind generated is intense enough to bore a hole through a 20-foot block of solid concrete or deform solid steel.

By manipulating the wind, Taranis can fly both himself and/or others at speeds equivalent to the maximum intensity he can generate, or at which he can still breathe. To date, he has been observed as being able to fly comfortably at speeds approaching 600 mph, with brief periods of supersonic bursts. Taranis can only remain in flight at altitudes where the planet’s atmosphere remains thick enough to allow him to manipulate it.

Taranis’ ability to manipulate the weather allows him to generate a variety of naturally occurring phenomena, including torrential rain, hail, snow, sleet, and radical fluctuations in local temperature and humidity levels. By careful concentration and the proper application of climactic effects compounded on top of one another, he would be able to produce a runaway storm which may extend well beyond even his ability to maintain control.

Taranis also possesses the natural ability to sense weather and climatic conditions planet-wide. He maintains a subconscious awareness of the Earth’s atmospheric well-being at all times, with a significantly more focused awareness locally. This ability extends to other planets to which he has traveled in the past as well.

Taranis possesses the ability to generate and control electricity and lightning. He can consciously manipulate electrical fields, charges, currents, and the Earth’s electromagnetic field in a localized area. He can generate electrical bolts from his hands or lightning from the sky ranging from unnaturally high levels to a simple static shock.

Taranis’ body possesses a natural resistance to any negative effects of the weather he may generate, automatically adjusting itself to maintain a perfect equilibrium regardless of his surrounding temperatures or conditions. He is also careful to not upset the Earth’s naturally occurring weather patterns too greatly, as prolonged manipulation in one location will rob another location of the moisture or other elements upon which it depends. Additionally, Taranis’ ability to manipulate weather extends to the weather of space, allowing him control over the solar winds and other such naturally-occurring cosmic phenomena.

Taranis makes use of an enchanted shield named “Skyspanner” constructed of a metal native to the dimension of Otherworld. This shield can not only conduct and amplify his own elemental electrical abilities but can disperse most magickal attacks directed against it. The shield can protect its wielder against high-intensity energy-based attacks, as well as temperatures of near-solar intensity. The points on the shield’s edge are sharp enough to allow it to imbed itself in even the most durable of terrestrial materials without suffering any damage. Additionally, when thrown, the shield makes a sound like rolling thunder and will return to Taranis’ hand without fail.

The shield also possesses the ability to accurately measure his position within the heavens, and allow him to navigate the cosmos without fear of becoming lost. Additionally, as the God of Justice, Taranis can use the shield to measure the guilt or truthfulness of an individual.
The shield’s enchantments are keyed to Taranis himself, and if anyone else attempts to wield it, it will behave no differently than any other shield, excluding its own unique material structure. Taranis can sense the shield’s location, and call it to return to his hand even across interstellar distances.

Taranis makes use of an enchanted chariot drawn by two great horses created for him by his sister Epona named Wayfarer and Journeyer. These two horses possess the ability to fly at hypersonic speeds, and their hooves create lightning as they travel through the sky. In addition, the horses possess the ability to travel between dimensions and open hyperspacial warps at will.

Taranis is also accompanied by a hunting hound named Breaker whose howl is so great that it can shatter mountains, and whose bite is unbreakable once he has latched onto his prey.