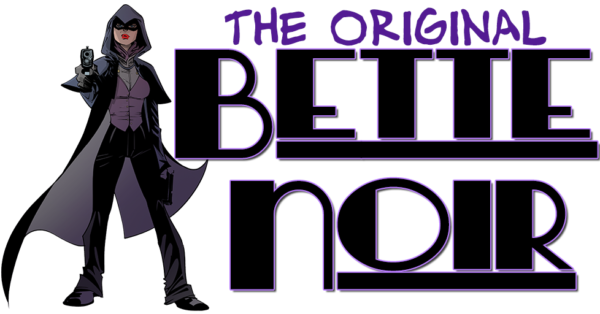 Created by: Jim Burrows
Art by: Mark A. Lester

Lady Elizabeth Grey, the daughter of the English adventurer, Lord John Grey, and his Turkish wife, Lady Ayla Sadik Grey, was born in Beirut in 1906. When she was 10 years old, her parents were killed by bandits while traveling in Persia. Only Liz and Marco, the teenage son of her father’s Italian assistant, survived. The two lived on their own for the next five years, at first fleeing, but eventually hunting, the bandits responsible for their parents’ deaths. During this time they met & studied under a number of teachers, including Master Tchen, a mysterious Chinese expatriate.

In 1921, they left Asia for Paris, where they lived with her aunt, Margaret Grey, who owned a jazz club there. In 1926, Aunt Peg’s beloved partner, Bebe, was killed in the club. It took Liz five years to discover the killer’s identity and to track him to Chicago, where he was the right-hand man of the capo of the Society of the Black Hand. Liz adopted the mask and identity of Bette Noir and, with the assistance of associates known as the League or the Legion of the Beast, took on the Black Hand, becoming the very first masked vigilante of the Twentieth Century. 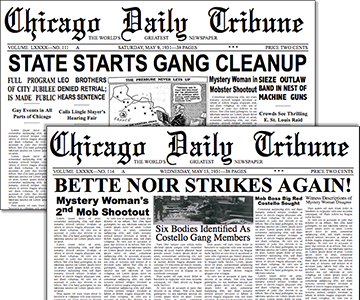 Bette owes her nom de guerre to the poor foreign language skills of a copy editor whose own name has been long forgotten. Reporter Jonathan Marshall, who observed her first clash with the Chicago mob, phoned in his story to the night desk at the Tribune. In it he made the prediction that she would prove be the bête noire of the Chicago gangs, as in fact she did. The night editor’s handwritten notes show that he correctly transcribed the French phrase, but by the time the copy was set, it had somehow been capitalized and the T doubled, perhaps by a fan of Miss Bette Davis.

The name stuck. When she clashed once more with the mob a few days later, the Trib’s front page headline read “Bette Noir Strikes Again!“, and so she came to be known. While Marshall, who also hosted a news commentary show on the radio, was unable to correct the spelling of her name, he did manage to establish its pronunciation as “Bet”, as befit its French origin, rather than “Betty”, à la Miss Davis.

Liz is expert in numerous forms of both armed and unarmed combat, as well as hunting and tracking. She wears a ‘20s Paris jazz-scene-styled bullet- and knife-resistant suit of layered spider-silk body armor created by Master Tchen, to which he added a tight-fitting black helmet and a spider-silk cowl. She carries a pair of 1919 Colt .45 semiautomatic pistols.

The pockets of her drover’s-style coat often carry additional weapons, such as smoke bombs, and collapsible fighting sticks. For much of the 1930s, Marco, then known as “Giordano”, chauffeured her in a black bullet-proof limousine.