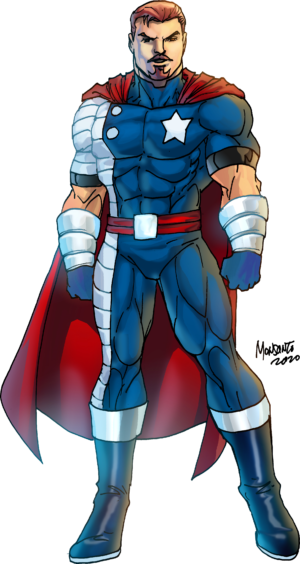 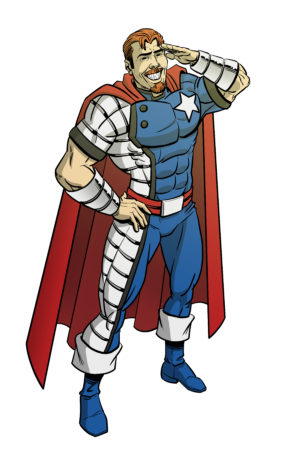 Heroism is in his blood. A third-generation costumed adventurer, Alex Michael Russell began life as an ordinary man. Though both his grandfather and father bore the mantle of AMERICAN EAGLE, he never showed any sign of superhuman powers. His sister Natalie, however, demonstrated them from an early age. Instead, Alex joined the United States Navy in order to serve his country in his own way, graduating with honors from the esteemed United States Naval Academy. Alex went on to become a pilot, having a lifelong love of flying born at an early age thanks to his grandfather’s former teammates (and in many ways, extended family) in the First Guard taking him for flights.

Years later, during an operation involving a rogue terrorist cell, Alex was leading a squadron of fighters into enemy territory where the cell was rumored to have obtained a unique new weapon of mass destruction. The terrorists had modified this device into a warhead, which they then launched at New York City. Alex immediately took off after the missile in a fighter jet, which unbeknownst to him had been damaged in the firefight, and gave chase. And though he was able to catch up to the missile, he was unable to destroy it from afar. And so, Alex flew his jet directly into the missile, detonating it before it could reach the United States, gladly giving his life for his country. And as the Navy was recovering the wreckage of the jet, they discovered Alex’s body floating in the water alongside it. Even more miraculous still, he showed signs of life!

Taken to a top-secret location, Alex remained in a coma for nearly a month while his body underwent massive mutagenic changes brought on by both his exposure to the unique energies of the warhead as well as his body’s now-unlocked genetic potential. Upon awakening, Alex discovered that he now possessed powers far beyond those of both his father and grandfather.

Adopting a signature uniform, and working in concert with the United States government, Alex now serves his nation as its mightiest defender, proudly carrying on his grandfather’s legacy into the next century. 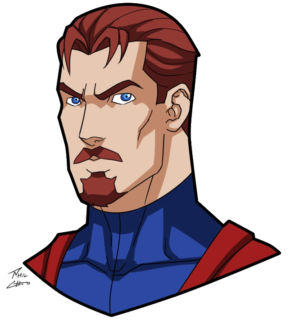 As a result of both his exposure to the unique energies of the warhead, as well as his own unique genetic potential, Alex Russell possesses vast superhuman abilities.

First and foremost among these is superhuman strength on an as-yet unmeasured scale. While the uppermost limits have yet to be tested, he has in the past lifted the Great Pyramid of Giza (a weight of approximately 5.75 million tons) aloft with only minor effort. He is also capable of denting (albeit only slightly) the nearly-indestructible metal known as Victorium. He also possesses invulnerability to harm from physical and energy-based attacks, as well as extremes in temperature.

Alex’s reaction time and reflexes operate at superhuman levels, enabling him to move at speeds fast enough to snatch bullets out of midair before they strike a target. He can also run at speeds far exceeding the speed of sound. His senses operate at heightened levels, enabling him to see objects in great detail over vast distances, as well as discharge focused beams of excess energy from his eyes. This “Thermal Vision” is hot enough to melt a solid block of duranium steel approximately six feet thick.