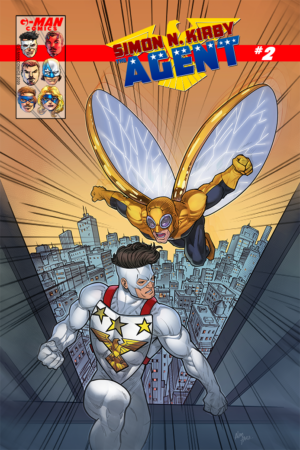 For this week’s installment I’ll be taking a look at Simon N. Kirby: The Agent # 2 from the good folks at G-Man comics and after reading this issue, I really enjoy how the Silver Age era is well represented but at the same time, brings with it a modern-day feel to it.

I love how the issue opens up with an appearance of The Murder Hornet, who’s basically Batman, Daredevil, The Punisher, and The Red Skull all rolled into one, as he deals with criminals in the most brutal way but after an altercation with Lynx (Where both Mateo Martinez and Maya Santiago share the name and identity) gets stabbed by The Hornet, It falls upon The Agent himself to confront the Hornet over this incident.

Rik Offenberger waste absolutely no time diving into The Murder Hornet’s origin, showing the readers that he’s even more deadlier than The Red Skull himself but simultaneously, showing that he’s extremely menacing to any hero that comes in contact with him; I’m still in awe over the fight sequence between The Agent and The Hornet which really brings a dynamic punch to this issue and I have to say that this is a series that shows so much respect for superheroes; Alan Faria’s artwork, on the other hand, is just flat-out beautiful and really has a Mark Brooks influence to it which is a really wonderful thing to take in as it really brings Offenberger’s script to life, making their collaboration all that special.

Simon N. Kirby: The Agent is a spectacular love letter to the Silver Age and my wish is that every comic book fan who loves superheroes as much as I do will enjoy reading this because it will definitely reignite anyone’s love for old-fashioned storytelling and at the same time, make Joe Simon and Jack Kirby very proud.

Well, that’s it for me. I’ll be next week so thanks for sticking around and I will see you all next time.