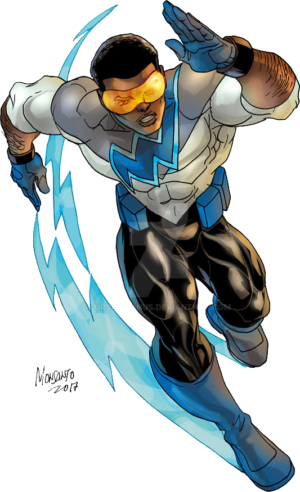 Calvin Conrad is the grandson of the famed hero of the second World War, The Blue Bolt. As such, Conrad grew up around superheroes most of his life, although they were all in retirement by that time. Regardless, he was treated as an adopted grandson by all of his grandfather’s friends throughout the years.
Instilled with a strong sense of right and wrong as well as a desire to help his community in any way he could despite his lacking powers, Conrad grew to be a well-respected member of his community. Attending college and earning his doctorate in engineering with the goal of using his knowledge to better the lives of those around him, Conrad met and married his childhood love, Rebecca. Together, they gave birth to three children.
One day, when Conrad was at home with his family, a strong thunderstorm swept into the city. The rain caused an accident a short distance from his home, and he immediately went to see what help he could lend. Aiding local authorities in freeing the passengers of one of the vehicles involved, fate intervened and Conrad was struck by lightning, rendering him unconscious.
Waking several days later in the hospital, he witnessed a nurse dropping a tray of medication, and miraculously was fast enough to catch everything before it could fall to the ground. He immediately contacted his grandfather, who, after arriving and running some tests, delivered the news that apparently Conrad now possessed superhuman speed powers identical to his own. His childhood dream at last fulfilled, Conrad adopted the costumed identity of Speedbolt. His grandfather had offered to give him the mantle of his own name, but Conrad felt unworthy.
After earning a name for himself as a hero both in and out of costume, Conrad was invited to join the modern United Nations-sponsored incarnation of his grandfather’s former team, The First Guard. As Speedbolt, Conrad accepted. Years later, Conrad’s grandfather passed away. Finally, at peace with himself and his family legacy, he changed his costume and elected to honor the legacy of his Grandfather as the second Blue Bolt.

Blue Bolt possesses superhuman strength, primarily in his legs. He is able to leg press approximately 1000 pounds. Otherwise, he possesses the strength of a man of his age, height, and build who engages in intensive regular exercise.
Blue Bolt possesses the ability to run and move at superhuman speeds. He is able to achieve an average cruising speed of roughly 500 mph, with an uppermost recorded maximum velocity of 5,700 mph. His entire body is oriented towards the rigors of moving at high velocities. His cardiovascular and respiratory systems are many times more efficient than that of a normal human. He is able to metabolize and estimated 95% of the caloric intake of all his foodstuffs (normal human usage is about 25%). The chemical processes of Conrad’s body are so advanced that he does not generate fatigue-poisons, the normal by-products of locomotion that force an individual to rest. Rather, his body expels waste products during his accelerated respiration through exhalation. His joints are smoother and lubricated more efficiently, and his tendons have the tensile strength of spring steel. His bones are able to withstand the dynamic shocks of his limbs moving and hitting the ground at speeds well over 100 miles per hour. Conrad’s practical reaction time is about 10 times faster than that of a normal human, and the speed at which his brain processes information is heightened at a level commensurate with his bodily speed, enabling him to perceive his surroundings while traveling at high velocities. The lachrymose membranes on his eyes are more viscous than normal, preventing rapid evaporation and replenishment of surface fluids under the influence of high wind velocity to occlude his vision, although he does wear a protective visor as a precaution.
Conrad is able to pluck objects out of the air buildings (with a 90-degree inclination) with a sufficient lead-in distance of approximately 100 feet to gain momentum. As long as he maintains a high rate of speed without interruption, he can traverse the surface of a liquid without breaking the surface tension and run across water.
Thanks to the enhanced nature of his metabolism, Conrad heals wounds at a highly accelerated rate.
Conrad is able to vibrate his body at such an accelerated rate that he becomes immaterial, allowing him to pass through most objects with a stable molecular structure. However, the effort of this act is exhausting and can have negative physical effects if prolonged. However, he is unable to pass through the nigh-indestructible metal known as Victorium.
Additionally, Conrad’s body generates a field that protects him and any object he is holding from the effects of high-speed friction.