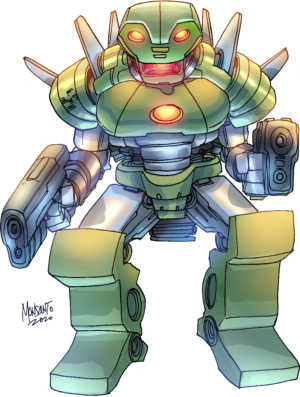 HISTORY
Vanguard is a prototype fighting machine, combining potent weaponry with combat technique superior to a combat vehicle. Designed to be the primary means of combat, supported by and fighting alongside tanks, fighter aircraft, and infantry, functioning as a mechanical cavalry. Combining a tank’s resilience and firepower with infantry’s ability to cross unstable terrain and a high degree of customization. The prototype was stolen from the US Military during testing and ended up on the hands of the Aryan Alliance. It is unknown how the militia group was able to accomplish the theft of this military hardware.

The Vanguard is equipped with two large-caliber, high-velocity 120 mm L30 rifled guns, capable of firing a variety of specialized artillery including kinetic energy penetrators, high-explosive anti-tank rounds, and in some cases, guided missiles. Anti-aircraft guns can also be mounted to the combat chassis.