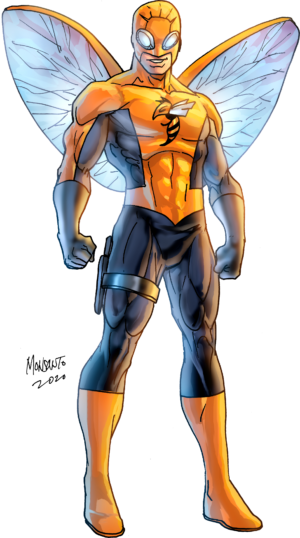 In the name of his murdered parents, Henry Rothländer wages eternal war on criminals, and minorities. He is vengeance. He is violence. He is Murder Hornet.

Murder Hornet has dedicated his life to an endless crusade, a war on all criminals in the name of his murdered parents, who were taken from him when he was just a child. Since that tragic night, he has trained his body and mind to near physical perfection to be a self-made icon for a white fatherland. He’s developed an arsenal of technology that would put most armies to shame. His bodyguard Jeffrey Schmitt pretends to be Murder Hornet in public to hide his true identity.

A billionaire playboy by day, Henry Rothländer’s double life affords him the comfort of a life without financial worry. Jeeves his loyal butler-turned-guardian helped him the perfect base of operations in the ancient network of catacombs beneath his family’s sprawling estate, called the Hornet’s Nest. Out of the public spotlight, he sheds all pretense, dons his iconic wings and stinger, and takes to the streets dispensing violence against underprivileged minorities, hiding his true intentions in a pretense of superheroic activity.

Murder Hornet does not have any metahuman abilities. Instead, he relies on his sharp mind and disciplined body, as well as his extensive combat and detective training. A master of virtually every form of martial arts, a brilliant tactician, and a genius-level forensic scientist, Henery also has access to his family’s fortune, which he’s used to creating a near-limitless supply of advanced technology for his war to establish a white Fatherland in America.

Housed in the Hornets Nest beneath Rothländer Manor is an armada of specialized weaponry, armor, and a supercomputer that links Henery’s technology across the globe and beyond.

Murder Hornet prides himself on being prepared for any emergency. He’s devised various fail-safes and plans for any number of potential scenarios. He’s more than ready to take on whatever a diverse society throws at him. Armed with wings and a flight suit filled with cutting-edge technology and his hair-trigger reflexes, Murder Hornet is ready to strike fear into the hearts of criminals and minorities everywhere; while presenting himself as a crimefighter.

A pair of insect-like wings that allow for flight. These wings are powerful enough to carry up to 300 pounds. In addition to the wings, Murder Hornet carries a “Stinger” Dagger, the blade is 3/8″ thick, 6 7/8” cast stainless steel with a black oxide coating and satin finish highlights. The handle scales are securely attached to the full tang with heavy-duty screws. The 11 5/8” fixed blade knife slides securely into an injection molded Vortec and nylon belt sheath, which has a snap closure strap, it sits on his upper leg so the hilt of his dagger is at hand height when his hands are by his sides ready for a quick draw. A leg strap keeps the dagger in place as Murder Hornet runs.