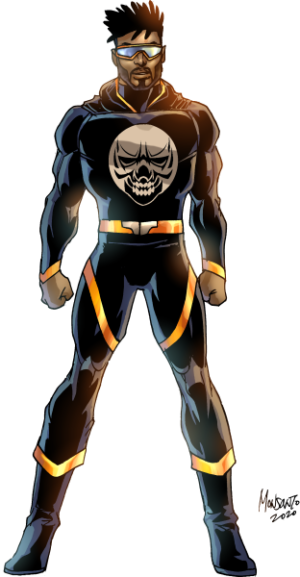 Ali Rashed is a Pharmacist in the city of Atlanta at Empire City Pharmacy. When his assistant Tim Roland, was killed in a holdup at the Pharmacy, Ali registered with the FBI as a superhero and donned a “Terror Twins” costume Tim had purchased at a costume shop. Ali has replaced the chest piece with a bulletproof vest and upgraded the costume over time. After bringing Tim’s killers to justice, Ali realized he should be doing more for his community. He needed to protect all of Atlanta’s citizens rather than just avenge the death of his friends. Ali has dedicated his life from that point forward to protecting those who can not protect themselves.

POWERS & ABILITIES
Terror Noir has no superhuman powers but uses his keen scientific mind and skill to find street crime, and root it out to make his city safe for all its citizens.

WEAPONS & PARAPHERNALIA
Terror Noir has no specialized weapons. His chest piece is bulletproof.