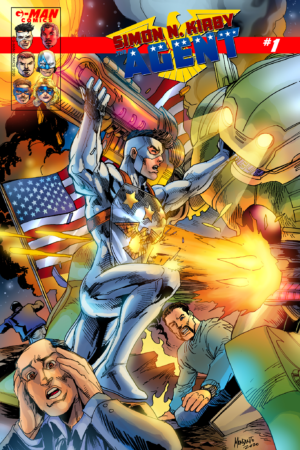 Title: Simon N. Kirby, the Agent # 1
Publisher: G-Man Comics
Writer: Rik Offenberger
Artist: Gilbert Monsanto
Letters: Eric N. Bennett
Script Editor: Lou Mougin
Production Editor: Jim Burrows
Cover: Gilbert Monsanto
Alternate Covers: Alan Farla, Steven Butler, Borgy Borgonia
Price: $ 5.00 US (Digital)
Rating: 4 out of 5 stars
Website: www.g-man-comics.com
Comments: The Agent is a man dedicated to his job. Sgt. Flag one of the gents working for The Agent is a tough man and one who can get the job done.
It is easy to see this comic of heroes are connected to the government. They act as they are told and carry out missions. You do get to see the American flag so it has patriotism.
Each mission is just filled with explosive action. The G-Men is the team name and these super-heroes have a touch of normal to them while still being inspiring.
The two page spread as the team goes into action is stunning it shows off the heroes beautifully. Who is behind the attacks? The Agent and his team are a team to be reckoned with. The team is made up of a nice variety of characters and powers and abilities.
The back of the comic provides bios of some of the characters and these are just what any reader would want to know who is who.
The art throughout this comic is remissness of Jack Kirby with the style. The battle scenes are just packed with action.