From: https://www.firstcomicsnews.com/rich-reviews-g-men-united-1/
by Richard Vasseur 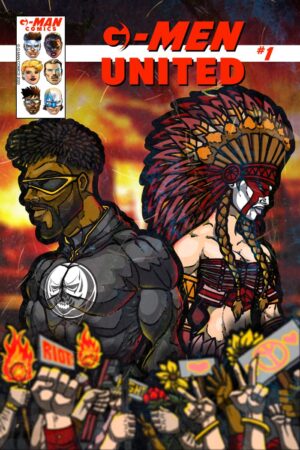 Title: G-Men United # 1
Publisher: G-Man Comics
Story: Rik Offenberger, Lou Mougin & David Ellis Leary, Earl Wajenberg, Jim Burrows
Art: Joshua 1:9 Holley, Fish Lee
Colorists: Bear Lee & Fish Lee, Joshua 1:9 Holley, Anna Holley
Letters: Eric N. Bennett
Cover: David Ellis Leary
Rating: 4 out of 5 stars
Website: g-man-comics.com
Comments: “Point of View” Pocahontas and Terror Noir both narrate their interpretation of events that happened to them as they handled a situation. Pocahontas looks gorgeous and threatening in her native American costume.
Afterward, we see these two super-heroes have a problem with each other. Yet when push comes to shove Terror Noir does respect Pocahontas. Both care about protecting the innocents and saving lives.
“The Energist & Irene: The Fifth Time” Uncle Dan comes to the rescue of his niece Irene. These two have a wonderful and loving relationship. Dan is one powerful man and Irene may be just what he needs to control and look after him.
“Into the Halflands” Flag is on a rescue mission. The area for the rescue is in another dimension one that is like a cartoon. Flag does get himself through the situation so he completes the mission. It is a fun one to go along with for the reader.
“I Want You!”  The FBI super agent leader whose name is never mentioned finds out he cannot control all the super-heroes. Yet he does find out that some super-heroes may not want to work for the government but they will work with them.
This is a wonderful collection of super-heroes being super-heroes as they were meant to be.