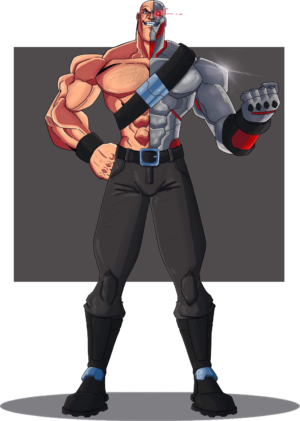 Vaughn Barron is a life- long White Supremacist, indoctrinated from an early age with the belief that skin color equates your place in society.
Critically wounded during a racially- motivated attack, Barron was given over to a group of scientists who promised to heal and improve him. But upon awakening, he was horrified to discover that they had replaced the entire left half of his body with robotic parts. Teaming with a fellow subject named Vinnie Brock (see Brain Bruiser), the two escaped.
Barron and Brock continue to operate with each other, with Barron now accept ing his new status quo as the ultimate step to the white race’s march toward “perfection.”

The left half of Barron’s body has been replaced with a robotic body granting him superhuman strength and durability on that side, as well as an enhanced intellect aided by his on-board computer.

His left side also contains a wide variety of weapons he can deploy and switch not as needed, as well as being able to interface with and control machinery at will. He can also fly at speeds of approximately 400 mph.